skip to main | skip to sidebar


The Taverns of Hegewisch
On the far southeast end of the City of Chicago is the tranquil neighborhood of Hegewisch. In fact it is so far south and east that many people in Chicago don't know it exist and Hossier commuters on the South Shore Line know Hegewisch in Illinois but will argue that it is a city south of the City and not actually part of Chicago!

Public Transportation to Hegewisch SUCKS. Only one CTA bus, the No. 30 makes it out to Hegewisch. To reach the number 30 bus you need to catch the Red line to 69th and then wait for up to a 1/2 hour for the number 30 to arrive. Afterwards you'll have the joys of meandering for about another 45 minutes as the bus cuts through South Chicago, the East side and then finally to Hegewisch.

This leaves you with the South Shore Line which can be a fun experience if you like delays, caused by a host of inexplicable problems, crowded trains and dpending on the season, drunken Cub Fans or noisy Hoosier brats going to Chicago for School field trips. On the bright side, the South Shore will get you to and from Randolph and Michigan in about 40 minutes, once the train arrives.

The seclusion of Hegewisch from the rest of Chicago make it an odd choice for Pub Crawling yet an adventurous sort may want to give it a go.

Why pub crawl in Hegewisch:
LET THE CRAWL BEGIN! 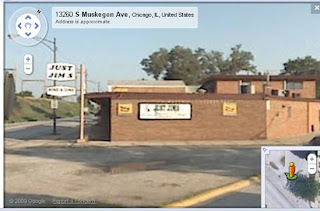 Begin your pub crawl in the early afternoon with a bite to eat and and a beer. Now if you come out via the South Shore train , you should resist the urge to stop in at the South Shore Inn save that for the night cap before you head home. Take the leisure stroll down the busiest street in Hegewisch, Brainard Avenue. It'll be a bit of walk and just to make it intersting there are spot where there won't be any side walk to speak of. You'll stroll pass the corner on Brandon that will someday be a memorial to something.

When you get to the stop sign at 133rd street, take look down the alley and see if a 4th district cop is waiting for someone to blow the stop sign, or if at night, taking a snooze.

Then there is Baba Pita's. and finally Just Jims.

You're at Brainard & Muskegon. After you eat nad have a cold one, maybe catch a bame of Bachi with the locals and then head a little north on Muskegon 'til you reach the 132nd Street. It is right there at Just Jim's back door. Star heading east. 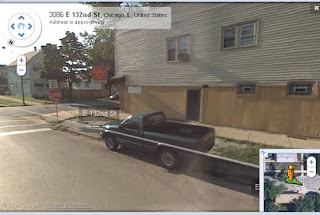 As you walk down 132nd you'll come to Mann Park. Some things to know about Mann park. It used to be a man made lake. When they were first settling Hegwish they pumped the water from the surrounding swamps to this loaction. Notice how the playing field is lower than the side walks. Then the drained the man made pond and built a park. See the pretty field house? Yeah it is reallybig. The filed house was dedicated by Mayor Richard M. Daley (the elder) then he promptly left Hegewisch and died!

As you continue east on 132nd and reach the end of the park, you'll find the bar with no name.
Stop in see if Vicki is around and maybe have another beer. Or be brave and ask for some fruity drink with an umbrella.

Come out and take a deep breath. Are you looking north down Houston Avenue? Yes that is Church just to the north of the bar! Both the tavern and the Church have been there for over 100 years! 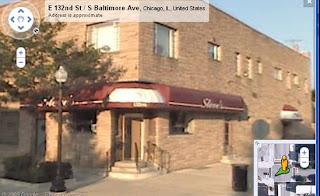 If you met Vicki and the bar with no name you'll probably wan tto beat feet a block further east (or go to the Church and say a few Hail Marys!)

You are now at 132nd and Baltimore, the northern corner of the Business district and the Home to Steve's lounge, Steve's Place, Steve's Catering, or just Steve's. You really need to stop by Steve's if you're coming to Hegewisch. It is a Hegewisch institution. As you enter, it will be hard to miss all the little figuirnes that run along the wall or the giant deer head! Drop by for a jager bomb or double shot of gin, whiskey or scotch. They have the Captain as well as most other drinks. The bar really doesn't care which way you swing either -- You can be a Cub fan or a Sox fan!

If you're there on a Friday, you may want to try a Chicken dinner (or fish during lent). Ask if they have kraut or salad dressing for sale. If you have a way to keep it cold, you won't regret buying a quart.

As you leave Steve's you may want to cross the street and grab a slice of Pizza from Doreen's You've got a two block walk south on Baltimore before you reach the next place. 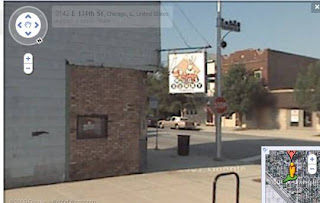 Mugs Bunny
Walking South on Baltimore two block means you have just just passed the business district of Hegewisch That means you passed one grocery store, a combination grocery liquor store, a travel agency, three banks, and a funeral home! You're not in front of Mugs Bunny. How they have managed to avoid trademark infringements is beyond me. It maybe the lawyers are as afraid of the owner as most outsiders are! Get your Corona, lay low and get out Leave a big tip so as not to get mugged A local bar for locals. time to go east one block to Brandon Avenue. 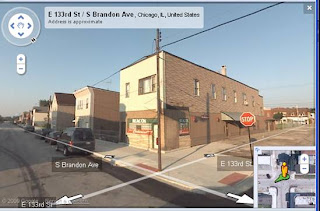 From mugs Bunny go east one block to Brandon Avenue and turn north. Do you see the old tavern that says "40 inch screen TV" Imagine that. It's closed. Go one block north and you'll find another bar, the "Beacon". sounds more like an newspaper agency than a tavern "The Daily Beacon" with luck you'll see a three wheel bike parked out front or on the side of the tavern. Just one of the locals. Drop on in and enjoy the ambiance. Yeah ti was nicer when it was filled with cigarette smoke. Does Daley realize how much nostalgia was lost with his damn smoking ban?

Stick around for a shot and beer and stumble east down 133th street. It's going to be along walk to the next place, Club 81 too. We're going to the "Avenues" 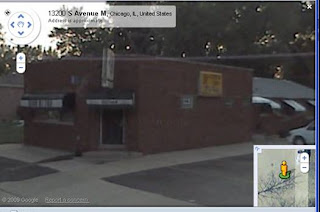 The walk east on 133rd is going to take a while You get to cross railroad tracks, you get to walk under power lines. and finally you'll reach a red light (or maybe it'll be green when you get there) That's Avenue O. Maybe'll youll wanna grab a slice of Pizza from Pucci's Maybe not.

Two more block east is Avenue M and then one block north is Club 81 Too. There used to be another Club 81 and when it closed the owner opened another one so this is "Club 81 Too" Get it. Yeah well. They got good food, especially if you like fish. Make sure there cooking the day you want to crawl unless all you want is a beer or somethin'. Next stop 2 blocks south of where you're at! 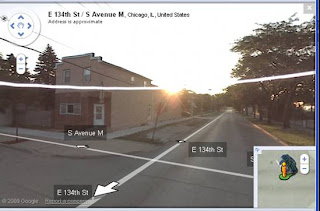 Hey you made the two block stumble. It's Georgies. Or may its Krupa's I dunno. Stop by say, hi to Dave and have a beer. Time to go west young fella. We're leavin' the Avenues for the Old Time drinkin' experience. It'll be a haul cause we're headin back to Brandon. 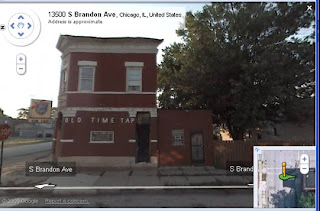 Did you make it back to Brandon. Good! Now go South one block to the Old Time Tap!. Have a tap beer, make it An Old Style! Are day is almost over. If you started an early crawl and it is before midnight, you may want to order a pizza from Pudgy's for your ride north. Let's walk over and see if Bob can make us one. You being out of town and all he may want you to pay up front if you're catchin the South Shore. But if you're willing to pay up front Bob'll deliver it to the station for you. Give him forty minutes. Walk one block west to 135th and Baltimore and drop in and chat for a while.

Okay time to leave beautiful Hegewisch. Lets stumble about 100 feet south on Baltimore and find Brainard Avenue again. Ah there it is. Better hang a left and walk down a two or three long block to the South Shore inn. 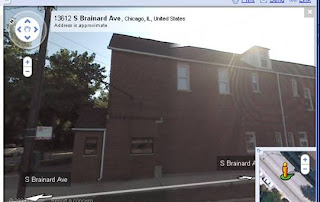 OK this is SOX country. I'll have a shot and a beer. What no carry out. I knew I should've stopped at Draggos. Oh well lets head over to the train station and wait fore the pizza and the train. It's been a long day. So long Hegewisch! We'll be back later for hot dogs and may more pizza.